John Dee (1527 to 1608) was one of the greatest scryers in history. Dee's private library of books was renowned throughout Europe. Through his studies Dee was well versed in the magic of the ancient world.

In 1591 he became strongly interested in spirit communication when he started having troublesome dreams and hearing knocking noises. He records these disturbances in his private diary. Dee began by trying to see visions within a small rock crystal.

Dee met Edward Kelley in 1582 when he came to his house seeking information about turning base metals into pure gold. Kelley had little interest in the angels other than trying to use them to make money. The angels treated Kelley with contempt and only used him as a line of communication to Dee. Dee had a strong interest in using the angels as political channels, but the angels where not interested. The angels where only interested in passing on the system of Enochian magic. The actual scrying method of Enochian magic was recorded in Dee's diary Libri Mysteriorum. 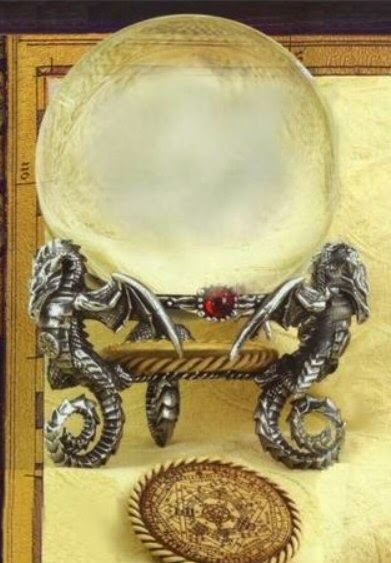 Dee's crystal was a small globe of rock crystal. Sometimes Dee used a mirror of obsidian which he called his jet shewstone. The crystal rested within a golden frame that had a cross on top. The crystal in its frame rested upon a seal called Sigillum Aemeth. The angel Uriel gave instructions about this. The Sigillum resides in the British museum today. The Sigillum was placed in the middle of Dee's scrying table. The angels gave instructions for the table as well. It was to be made of sweetwood and two cubits in all directions. A magic square of twelve Enochian letters occupies the centre of the table. The table was draped with a white silk cloth. Around the central square of the table were seven talisman known as Ensigns of Creation. Dee always opened each scrying session with a prayer.

Dees method shows just how exact a scryers table must be. The details were dictated to Dee by the angels.