I Ching is The Book of Changes, is one of the oldest Chinese texts. It is believed to be several thousand years old, though the oldest copy is probably from only some hundred years before current reckoning. I Ching is also a divination method, when combined with coins or sticks. The idea of this is, that you get "lines" by throwing the coins or sticks according to a certain method, and these lines read in 64 different ways, thus referring to 64 different strofes in the book. These words are rather mystical, weird for a person who hasn't grown in the old Chinese culture, and was the origin of fortune cookies' messages. Some of these words have become Chinese proverbs. I Ching has strong influence in the Chinese culture, as the text was interpreted not only as a collection of proverbs, but as a philosophy of life and a system of cosmology - basically, I Ching was the picture of the world as the Chinese people knew it 2000-3000 years ago. The basic principle of this world order was that everything changes, flows from one event into another, everything is built on the balance of opposites, the eternally swirling disc of yin and yang.

The oldest divination method used yarrow stalks, but as it was replaced with the more reliable (that is, all the possibilities are as possible, while with the yarrow stalks some combinations are more probable than others) coin method during the Han Dynasty, it was also forgotten. The modern yarrow stalk method is a reconstruction and recreation.

You are to have 50 (or 52) yarrow sticks.
You are to take one from the bunch and lay it in front of you.
You are to divide the rest randomly in two piles, and set the piles right and left from you.
Take one stalk from the right hand pile and place it between the ring finger and little finger of your left hand.
Remove the stalks from the left hand pile four stalks at a time until you have only four or less stalks left. Tuck these between the ring finger and long finger of your left hand.
Do the same with the right hand pile and tuck the remaining 4 or less between the long finger and index finger of your left hand.
You should now have 5-9 sticks between your fingers. (Why not 3? Because if you have only one stick left in one of the piles, you will have 3 sticks in the other. Anything else just isn't possible.)
Now you lay these sticks across the first one you removed from the pile, and take the rest of the sticks and repeat what you just did - divide in two, remove sticks 4 at a time, stuck between fingers and so on, twice. This time you will end up with 4-8 sticks.
You should end up with 3 piles of sticks across the first one.
Now, there's only three possibilities here.
All piles are small (4-5 sticks). This is a changing yang line. (draw a cross over the long line)
All piles are large (8-9 sticks). This is a changing yin line. (draw a circle between the two short lines)
Two are small and one is large. This is the unchanging yin line. (two short lines)
or
two are large and one is small. This is the unchanging yang line. (a long line).

This is your first or bottom line of your hexagram. You need to repeat this five more times to get the rest of the six lines.

You can really use anything, it doesn't necessarily need to be yarrow sticks. It could be long matchsticks, pieces of bamboo, pick-up sticks or even strips of paper.

The coin method is a bit easier.
You need three coins with a distinct head and tails side. Any coins, even buttons or tokens will do, even though the old chinese coins are preferred.
You toss the coins for each line.
Heads give you 3, tails 2, so you will get any result from 6 to 9.

Here is explained some probability and a method of using only two coins or 16 marbles, beads, stones or anything else, that is of 4 different colors but otherwise the same.

Now, what do these hexagrams "say", then? That will be explained later :-) 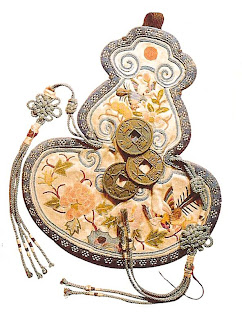 Email ThisBlogThis!Share to TwitterShare to FacebookShare to Pinterest
Labels: divination, I Ching