Xylomancy, reading trees, is so old a technique that no one actually knows today how it is done. If you look at the definition, you will see that it is an "old Slavonian divination method" using twigs.
Some say that a xylomantist read the formations of fallen twigs.
Some others say that people used to ask advice of logs instead of twigs. (This probably means watching how the logs behave in the fireplace, and the Yule Log superstitions are reminiscent of this.)
Yet some others say that it is the predecessor of arrow divination, Belomancy. It could have been something like I Ching - in one form of I Ching dried stalks of yarrow are used.
It could also have involved having a bag of odd pieces of wood and sticks and tossing them on the ground, like runes or stones.

As no-one knows how this is done, you have very free hands to create your own method. I would use the Omen Walk, as described by Callia Underhill in her wonderful book, Witch's Book of Divination. Basically, what she says is that all the symbols we use in divination are quite personal and self-created. We LEARN to know the tarot cards and others, even though we already have enough experience and understanding to read them subconsciously. She suggests that you write your own book of symbols, by writing in your own meaning to the symbols.
To me, dreaming about flying and horses have nothing to do with sex, but everything to do with freedom and happiness. To me squirrels are not thieves, but slightly mischievous pranksters.

Go to the woods, walk around and see what there is. Trees could have boughs and twigs that look funny, or interesting, or something. When I was young there was a pine tree by my school road, and it looked as if there was a pony locked inside, trying to escape. I could see the head and neck, and two legs. The twigs of another formed a word "isi", which is "daddy" in Finnish.

There is also an old sign language. Almost all native peoples who live in a forested area have a tradition of using twigs and stones put in certain formations to convey messages to those who pass by. The Boy Scouts have adopted some of them to make their “trail signs”. 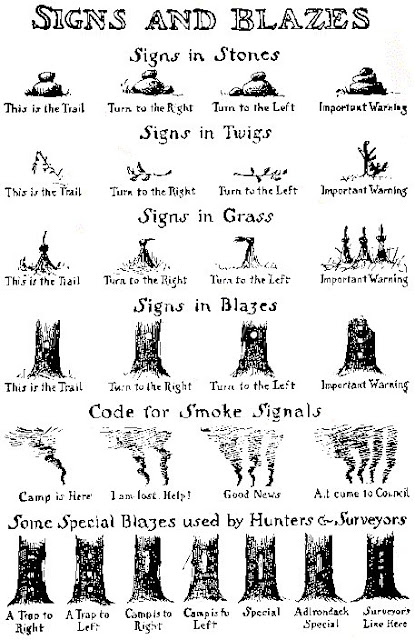 I think it would be beneficial for your efforts to understand what the woods are trying to tell you, if you learned these and both runes and Ogham. The more symbolic languages and pictograms you have in your mind, the easier it is for you to interpret the omens around you.

Write in your symbol journal all the possible ideas you get when walking in the forest, so that when you need to start reading the trees, you are prepared.
at September 27, 2010