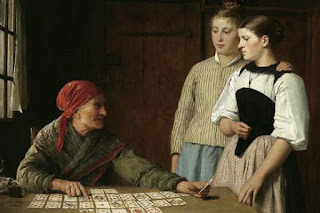 When using cards to divide the unseen and unknowable, one starts by giving each card a symbolic meaning. These meanings differ from country to country and time to time, so you can choose which ever meaning that fits you best. After all, divination is reading the symbols. The cards themselves have no magical, mystical powers. :-D

But - that being said - there are beliefs associated with reading the cards.

There are the spreads, that are about the same as with tarot cards.

The card combinations have a meaning as well as individual cards and their placement.

Interpretations from Shuffling and Cutting

Who would have thought that a reading can begin from the cards even before that first card is laid out. Look carefully and note how the cards are shuffled and cut. Every person is different and has their own style, but this can even differ between readings.

When a person shuffles only the bare minimum number of times, this of course shows how eager they are to get straight to the point.

When cards one or a few cards fall out during shuffling, take note of what they are because they are important to the reading.

When a lot of cards fall out, the querent is either not used shuffling cards, or they are reluctant or ambivalent about the reading.

When a person cuts only the top few cards from the deck, or leaves a tiny little pile, then they are reluctant to do the reading. This shows they do not really want to reveal too much or find out the true answer.

When cards fall from the deck as a person cuts the cards, this also shows a certain ambivalence or reluctance about the reading.

Shy and impressionable people cut the deck with their face virtually inches from the cards. They also tend to take any interpretations extremely literally despite their avowed scepticism.

Troubled querents also cut the deck with their faces inches from the deck and may take some time to do it. I also find these people tend to cut the deck dead centre if they can manage it and are most concerned to be doing it "right". These people tend to demand exact predictions and interpretations but this is because they are so troubled by their question.

Complex people tend to cut into multiple piles. These people cannot decide if they want to take the cards seriously or not.

Querents who are confident of the answer they think they will receive cut with their arm fully extended, often with a smile on their face.

There are people who barely glance at the cards when cutting them and expect you to shuffle and replace the cards in one pile. These people do not expect anything from the cards and are majorly sceptical or simply do not really want a reading.

When querents sit right back in their chairs and cross their arms you know they are feeling defensive. When the cards get right to the heart of the issue, you notice them lean forward and the arms are uncrossed. This simple body language reveals so much, and can be useful when the querent is determined to say only the bare minimum.

The next time you do a reading for yourself, notice how you cut the cards. Often you can pick up from the cut if you are secretly reluctant to know the answer (usually because your intuition/subconscious already knows the answer won't be what you want to hear).

Special Combinations to be aware of

Email ThisBlogThis!Share to TwitterShare to FacebookShare to Pinterest
Labels: cartomancy