Looking at the Comparative Tarot Method with One Card Comparisons

from Tarot Outside the Box by Valerie Sim
Abridged version, for educational purposes

I have to stop before going any further and make the necessary disclaimer here: There are no cards that are totally "good" and there are no cards that are inherently "bad". Some cards are generally viewed as beneficial and others are widely seen as challenging, but all of the cards can run the full spectrum between positive and negative. Until you see both the promise of the challenging cards and the pitfalls of the welcome ones, you are not a real reader. The Comparative Tarot Method can help you to discover the full spectrum inherent in each of the cards.

To illustrate, let's start with a card that most people are delighted to have appear in their readings: the Nine of Cups.

I will begin with the Universal Waite version of this card, as its predecessor, the Rider-Waite deck, was my original comfort deck and is known to most Tarotists in the United States. 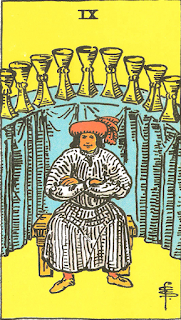 In this card we see the visage of the familiar chubby-cheeked and smiling older gentleman. He looks like he is very happy, good-natured, and well fed. But is he happy or is he inebriated? Sometimes he strikes me as merely jovial, while at others he seems clearly besotted.
Many people know this as the "wish card". I have heard countless beginners say it indicates that your wishes will be fulfilled and that you will get whatever you want. As a general rule, I tend to see it more as a card that indicates you will get what you THINK you want, and often as a message to "watch what you ask for; you just might get it." For the sake of this example, though, let's just consider it as indicative of a sense of satisfaction and the enjoyment of desired results. Now let's take a look at the Nine of Cups in numerous other decks to see what they might have to add utilizing the Comparative Tarot Method. 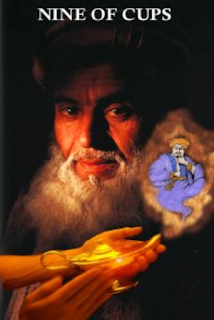 The idea of the wish card is conveyed literally in Paula Gibby's Nine of Cups from the self-published Blue Rose collage deck. Here we see the famous lamp of Aladdin complete with the stroking hands and the wise genie in the background. 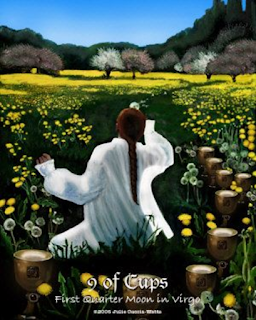 Julie Cuccia-Watts' Ma'at Tarot endows us with another version of the "wish card". Quoting Ms. Cuccia-Watts from a private e-mail, she states: "Wishes as dandelion seeds in the wind". This fits in well with the waxing Virgo Moon because Virgo in this deck denotes the barren earth of Spring. The dandelion seeds represent the symbolic power of wishes that can fill this virgin blankness. The woman in the card is literally sowing wishes on the wind. Will she like her harvest? Sorry about the quality of the picture, I just couldn't find a proper image of it, and I don't have it.

In the PoMo Tarot by the late artist and historian Brian Williams, this card is titled the "Nine Bottles". Edouard Manet's A Bar at the Folies-Bergère, painted in 1881-1882, inspired this card. Here our modernistic Mona Lisa looks tired, dissipated, and used up, though her eyes contain a glint of life yet unstirred. Brian Williams likened this to "the silence under the cheerful noise, the emptiness under the glitter, the loneliness of the crowd" (Williams 2003, 69). This is a snapshot of the busy social life that hides the fact that this social butterfly is one who is privately lost and floundering.
Her we have a tongue-in-cheek look at wealth, opulence, and affluence, yet we see the emptiness that may lie behind such riches. I look at this modern-day Manet and think of poor little rich girls like Barbara Hutton or disillusioned stars like Marilyn Monroe. You can have wealth, fame, riches, and so on, yet still feel empty and hollow. The dream, though achieved, is not a source of any lasting happiness.
To the simple wish card of the Universal Waite deck I would like to add with the PoMo Tarot, "Is that all there is?"

The Servants of the Light Tarot 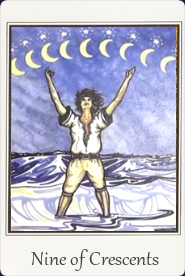 The next deck we will consider is The Servants of the Light Tarot, by Dolores Ashcroft-Nowicki. This deck is fairly unusual in that the Major Arcana were drawn by Josephine Gill, while the Court cards and Minor Arcana were drawn some years later by Anthony Clark. In the Nine of Cups for this deck we see a Christmas tree standing on a windowsill. The theme here is celebration adn happiness complete with presents and good cheer. From suggested visions of figgy pudding to bank notes, this card is at first glance totally positive, but reversed or ill-dignified it could mean riches or inheritance via ill-gotten gains. So is it treasure or tinsel? And who is paying for all those fantastical presents anyway?

(Christmas tree? She is talking about the Nine of Spheres, Nine of Pentacles in this deck... oops...) 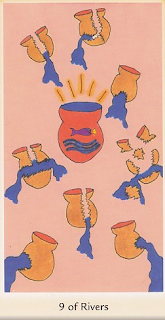 In the book accompanying The Shining Tribe Tarot, by Rachel Pollack, Ms. Pollack begins with this poem:


When the ocean fills with tears
the redeemer will come
When we have healed the ocean
we will fill it with light
Pollack 2001, 159

She goes on to relate how this card, illustrated with eight cracked jars surrounded by a central whole jar, derives from a creation myth found in the Qabalah. The eight broken pots represent the fragmented areas of our lives. The central pot is healed and shines with the dark waters of the unconscious. Ms. Pollack explains how this illustration conveys our lives of broken shards and refers to them as "pieces of truth in which the light lies buried" (Pollack 2001, 159). The card references the Orthodox Jewish belief in gilgul, or reincarnation - the idea being that it takes many lifetimes to become that central healed pot. Along the way we quest for monetary happiness, fame, and/or victories, and consequently experience a lot of broken crockery. Restoration requires helping others by sharing one's inner truth. Forgive the mixed metaphors, but this is a case where walking the talk makes the pot whole. I like this card's message about the inner spiritual health that is necessary to attain true happiness.

The Tarot of the Crone 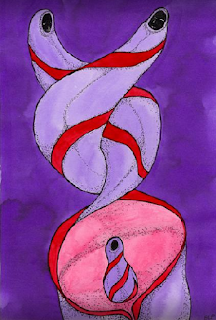 The Tarot of the Crone is a self-published and extremely visceral glimpse of ancient wisdom by author, artist, and poet Ellen Lorenzi-Prince. Ellen's Nine has a theme somewhat similar to that of Rachel Pollack's. Again, we look at that which is broken becoming whole, but in a startlingly different and beautiful way. Ellen's poem to accompany this card she aptly subtitles "Healing" is as follows:

I am the Many and One
I am whole who has been broken
I am the power of redemption
I am the renewal of creation.

The Wheel of Change Tarot

Another deck that uses pots or large urns to portray the suit of Cups is Alexandra Genetti's vibrantly colorful The Wheel of Change Tarot. In the Nine of Cups in this deck we see large pots of olive oil and wine lost in a shipwreck and resting on the deep waters of the ocean (so "cuppish") while schools of fish swim among them. In almost all decks this Nine expresses some aspect of our emotions, spiritual growth and/or wholeness. This card is no exception. As Ms. Genetti writes, "the Nine of Cups represents significant growth in the understanding of our emotions and their origins" (Genetti 1997, 250). This card is an excellent visual metaphor for that concept, as it is truly necessary for us to plumb the depths of our emotions in order to experience our deepest feelings and to both understand and recover them. The depth of the sea here represents the infinite depth and breadth of the collective unconscious and the emotions and archetypes we all share. Likening back to Rachel Pollack's whole and cracked jars, depth and wholeness are an integral part of real happiness as expressed in many Rider-Waite clones with far different illustrations. 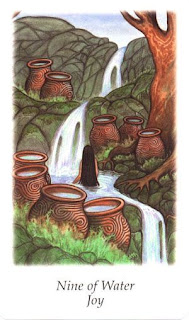 The Vision Quest Tarot also uses large urns for its visual of the Nine of Cups, and this is another rendition that I really like. In this card, we see a streambed that arches gently up to a small waterfall. A young maiden is wading in the streambed filled with literally life-giving water. The stream is lined by nine large jars filled with these precious waters. This is extremely appropriate, as in almost all indigenous cultures not only happiness, but life itself, depended on the availability and quality of the potable water. The riches people and the wealthiest societies were those that harnessed and controlled their water supply. This card helps us to see that water as a symbol of emotion leads you to think of what you nourish and what nourishes you, how emotions are expressed, how they are contained, and how they are quencehd as a necessity of life. What sustains you emotionally? For what do you thirst? 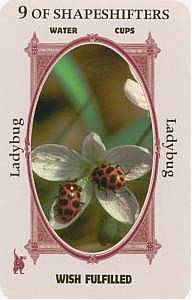 In the Animal-Wise Tarot by Ted Andrews, the Nine of Cups is known as the Nine of Shapeshifters. It is illustrated with the ladybug, also known as the ladybird beetle. Ladybug is considered lucky in numerous cultures, many of which wish upon her for good luck. This small red and black beetle is an aid to pollination and dines on aphids, making it the heroine of rose gardeners and many other horticulturists. The ladybug was also said to "fly to one's true love", making it a possible messenger or herald of emotional bliss, a symbol of getting what you want, specifically as it applies to emotional needs.
The life span of the ladybug is from nine to eighteen months, so Ted Andrews cites this as the length of the lucky time span indicated by the appearance of this card. This accentuates the lucky aspects of this watery Nine and brings to mind its association with Jupiter, planet of luck, which leads us to our next deck. 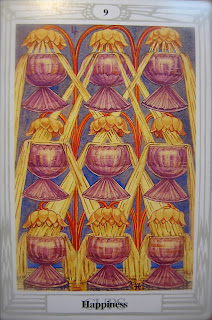 The Thoth deck, envisioned by Aleister Crowley and painted by Lady Frieda Harris, was first published in 1944 as The Book of Thoth. Though conceptualized by two concurrent members of the Golden Dawn, no two Tarot decks could be more different in look and feel than those created by A.E.Waite and Aleister Crowley.
In this card we see lotus blossoms pouring wine into nine chalices, a vision that signifies overflowing joy. Astrologically, this card corresponds to Jupiter (Happiness, trust, magnanimity, luck) in Pisces (spirituality and universal love). This combination of planet and sign suggests bliss, optimism, trust and happiness. As per the illustration, it whispers of joy/luck (Jupiter) that lets the heart (cup) overflow. 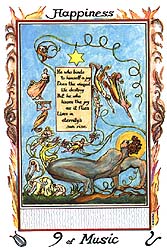 The William Blake Tarot by Ed Buryn utilizes an entirely novel reassignment of the four suits based on the vision of artist and poet William Blake (1757-1827). The closes match to a conventional Nine of cups is the Nine of Music in the William Blake Tarot. In this deck, emotions are perceived not to be the flowing watery type of the Cups in most suits, but are described within the passionate intensity of Fire. Happiness is still the theme of this card, but it is arrived at from a slightly different direction. In his Ode on the Spring, Blake demonstrates how happiness, like the flowers of spring, are ever-renewing, but are only available to those who seek them. One is advised to passionately "kiss the joy as it flies".

(Actually, the poem is "Eternity" and it goes

Email ThisBlogThis!Share to TwitterShare to FacebookShare to Pinterest
Labels: tarot