Palmestry from Lilly's Book of Knowledge

From The Lilly Book of Knowledge,
Published in New York 1806

Written by Erra Pater, a Jewish Doctor in Astronomy and Physic,
Made English by W. Lilly, Student in Physic and Astrology. 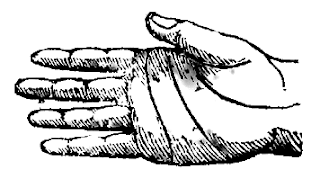 II. Of Palmestry, shewing the various Judgments drawn from the Hand.

I SHALL next say something of Palmestry, which is a judgment made of the conditions inclinations, and fortunes of men and women, from the various lines and characters which nature has imprint∣ed in the hand, which are almost as various as the hands that have them. And to render what I shall say more plain, I will in the first place present the scheme or figure of a hand, and explain the various lines therein.

By this figure the reader will see that one of the lines, and which indeed is reckoned the principal, is called the line of life; this line incloses the thumb, separating it from the hollow of the hand. The next to it, which is called the natural line, takes its beginning from the rising of the fore finger, near the line of life, and reach∣es to the table line, and generally makes a triangle, thus △. The table line, commonly called the line of fortune, begins under the little finger, and ends near the middle finger. The girdle of Venus, which in another line so called, begins near the joint of the little finger, and ends between the fore finger and the middle finger.

The line of death is that which plainly appears in a counter line to that of life, and by some is called the sister line, ending usually at the other end; for when the line of life is ending, death comes, and it can go no farther. There are also lines in the fleshy parts as in the ball of the thumb, which is called the mount of Venus; under each of the fingers are called mounts, which are each one governed by a several planet, and the hollow of the hand is called the plain of Mars. I now proceed to give judgment of these several lines. And in the first place take notice, that in Palmestry the left hand is chiefly to be regarded; because therein the lines are most visible, and have the strictest communication with the heart and brains. Now having promised these, in the next place observe the line of life, and if it be fair, extended to its full length, and not broken with an intermixture of cross lines, it shews long life and health; and it is the same if a double line of life appears, as there sometimes does. When the Stars appear in this line, it is a significator of great losses and calamities: if on it there be the figure of two O's, or a Y, it threatens the person with blindness. If it wraps itself about the table line, then does it promise wealth and honor to be attained by prudence and industry; if the line be cut or rugged at the upper end, it denotes much sickness. If this line be cut by any line coming from the mount of Venus, it declares the person to be unfortunate in love, and business also, and threatens him with sudden death. A cross between the line of life and the table line, shews the person to be very liberal and charitable, and of a noble spirit. Let us now see the signification of the table line.

The table line, when broad, and of a lovely colour, shews a healthful constitution, and a quiet and con∣tented mind, and courageous spirit: But if it have crosses towards the little finger, it threatens the party with much affliction by sickness. If the line be double, or divided in three parts in any of the extremities, it shews the party to be of a generous temper, and of a good fortune to support it; but if this line be forked at the end, it threatens the person shall suffer by jealousies, fears, and doubts, and with the loss of riches got by deceit. If three points such as these ... are found in it, they denote the person prudent and liberal, a lover of learning, and of a good temper. If it spreads itself towards the fore and middle fingers, and ends blunt, it denotes preferment. Let us now see what is signified by

The middle Finger.] The line has in it sometimes (for there is scarce one hand in which it varies not) divers significant characters. Many small lines between this and the table line threatens the party with sickness, and also gives him hopes of recovery. A half cross branching into this line, declares the person shall have honor, riches, and good success in all his under∣takings. A half moon denotes cold and watery dis∣tempers, but a sun or star upon this line promiseth prosperity and riches. This line doubled in a woman shews she will have several husbands, but without any children by them.

The line of Venus, if it happens to be cut or divided near the fore finger, threatens ruin to the party, and that it shall befal him by means of a lascivious woman, and bad company. Two crosses upon this line, one being on the forefinger, and the other bending towards the little finger, shews the party to be weak, and inclined to modesty and virtue; and indeed, it generally denotes modesty in women; and therefore those who desire such wives, usually choose them by this standard.

If it happens that this line and the middle line be∣gin near each other, it denotes a person to be weak in his judgment, but if a woman, danger by hard labor.

The plain of Mars being in the hollow of the hand, or if the line passes through it, which renders it very plain, is fortune: This plain being hollowed, and the lines be crooked and distorted, threaten the party to fall by his ill conduct. When the lines begin at the wrist, long within the plain, reaching the brawn of the hand, they shew the person to be one given to quarreling, often in broils, and of a hot and fiery spirit, by which he shall suffer much damage. If deep large crosses in the middle of the plain, it shews the party shall obtain honor by martial exploits; but if it be a woman, that she shall have several husbands, and easy labour with her children.

The line of death is fatal, when any crosses or broken lines appear in it; for they threaten the person with sickness and a short life. A clouded moon appearing therein, threatens a child bed woman with death. A bloody spot in the line, denotes a violent death. A star like a comet threatens ruin by war, and death by pestilence; but if a bright sun appear therein, it promises long life and prosperity.

As for the lines in the wrist being fair, they denote good fortune; but if crossed and broken, the contrary.

Thus much with respect to the several lines in the hand. Now as to the judgment to be made from the hand itself: If the hand be soft and long, and lean withal, it denotes the person of a good understanding, a lover of peace and honesty, discreet, serviceable, a good neighbour, and a lover of learning. He whose hands are very thick and very short, is thereby signified to be faithful, strong and laborious, and one that cannot long retain his anger. He whose hands are full of hairs, and those hairs thick; and great ones, and his fingers withal crooked, he is thereby noted to be luxurious, vain, false, of a dull understanding and disposition, and more foolish than wise. He whose hands and fingers do bend upwards, is commonly a liberal man, serviceable, a keeper of secrecy, and apt (to be poor for he is seldom fortunate) to do any man courtesy. He whose hand is stiff and will not bend at the upper joint near his finger, is always a wretched miser∣able person, covetous, obstinate, incredulous, and one that will believe nothing that contradicts his own private interest. And thus much shall suffice to be said of judgment made by Palmestry.
at April 09, 2016