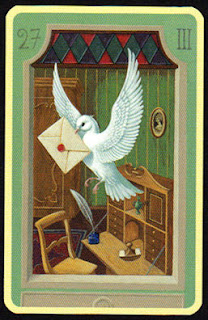 So... I will get personal communication today. Nice!

So - let's work on the list of words.
This card is The Letter, number 27 in the Lenormand deck. There shouldn't be anything but the letter in the picture. So... what is "letter"... letter, message, postcard, posted communication, thinking about you, writing on paper, letters... connection... private message... at that time... has been replaced with telephone, messaging, email... replaced in its time clay tablets and quipo strings... now, in this image, there's a dove carrying the letter in its beak... the room has an ink bottle and quill and what's that called, the blotting tool thingy. And an old fashioned secretary desk. It's a very old-fashioned room. And I would say the writer is a leftie. :-D
The directions and colors in the picture also has meaning. The bird is central, in movement, very much alive, but flying to left, into past... The chair is empty. The letter writer is absent. Makes me think of messages from the past as well as messages to the past. Time travel? Memories?
Perhaps this person doesn't want to be with other people. E is old-fashioned, and lets birds transport e's letters...


"Angel Number 27 is a message from your angels that new information or news of a positive nature is on its’ way, so listen to your intuition and heed its guidance for your highest good."
Angel Number 27; Joanne Sacred Scribes

The same site also states that repeating number 3 means there's an "Ascended Master" near you.


"The numerology number 27 is about philanthropy and compassion in a cooperative atmosphere."
Number 27 meaning


Now, the playing card. Lenormand has playing cards depicted on them (usually) and Letter is 7 of spades.

This card represents the uncovering of a truth, a removal, or a loss of some kind. There may be a disruption among friends, quarrels with others, loss of a friendship, or an ending to a relationship. Avoid arguments with friends for now.

The seven of spades indicates a lack of opportunism and announces the dangers linked to immobility, and relates to the short-term sorrows that put the consultant in an unstable situation.
Latin Cards: Seven of Spades

Generally the 7 of Spades represents a setback or a reversal of fortune, and in relationship readings it invariably shows a cooling off of affections.
7 of Spades: Art of Cartomancy

In Russian Gypsy Fortune Telling Cards Letter means "news from the far" and it has 4 meanings, depending on how it stands:
Upright, Position 1 Meaning Happiness will come to you from afar.
Position 2 Meaning Interesting, unexpected news.
Position 3 Meaning you will hear long-awaited words.
Reversed; Position 4 Meaning Sad news.

In Katina's Deste cards the meaning of Letter is "News. A message coming from a distance. The cards around will tell what kind of message it is, positive or negative.
It can also mean that someone or something you have been waiting for, is coming to you - reversed it means that he/she/it is NOT coming"

"Enemy successful."
"Dark girl; a good card; it promises a country life after a competence has been secured.
Reversed
Good advice, probably neglected."
"Good news. A letter from a distance. Bad news. An invitation."
"Hope, Confidence, Desire, Attempt, Wish
Reversed
Wise Advice, Good Counsel, Wisdom, Prudence, Circumspection.""Everyday worries, or a resolve taken
Reversed
silly stratagems in love-making."
"by means of a lost letter a secret will be revealed, and this will cause much sorrow; an officer will restore the letter, and all will end well."

as a person:
- a writer
- good communicator, orator
- "letter carrier", someone who delivers the message, what ever kind of message it is, so if it's a facial expression, it's the person twisting her face :-D - any person you communicate with

General Description: The Lenormand Letter is the card of written communication. It can come in any form – email, letter, fax, newspaper… It can also indicate business documents (such as an invoice or memo), legal documents (such as a will, court order, or parking ticket), or school documents (e.g., report cards and diplomas.)
documentation or paperwork of any kind. It can mean things such as diplomas, certificates, resumes, invoices and permits, for example.
The letter card represents news and messages. It's all forms of written communications. It can come in the form of a note, a document, email, text messages and letters.
The letter also involves written documents, such as licenses, diplomas, certificates, and permits. It includes postcards, flyers, junk mail and brochures.
All forms of paperwork. Anything that can be written.

Anna K. about the Letter

Career:
information is coming; invoices, memos, resumes, any business related paperwork
You should receive some form of appreciation at work, such as an award.

The Body: Hands and fingers

Love: written correspondence with a loved one. A love letter, online courting, Valentine You should receive a love letter.

Timing: Something that happens quickly; the month of June; could mean 27th day of the month

Questions to Ask with The Letter

What do I need to communicate?
Who do I need to reach out to?
What kind of documentation do I need?
What am I holding inside?
What do I need to write or email?
Write your feelings and thouhgts on paper to release them
What message are you trying to convey?
Are all of your documents in order?
Do you need to renew/get a license or permit? Any official papers?
at October 02, 2016