From
A MANUAL OF CARTOMANCY FORTUNE-TELLING AND OCCULT DIVINATION
Including
The Oracle of Human Destiny, Cagliostro’s Mystic Alphabet of the Magi, The Golden Wheel of Fortune, The Art of Invoking Spirits in the Crystal, The Various Methods
of Divination
By
GRAND ORIENT 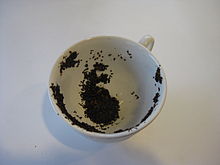 Pour the grounds of tea or coffee into a white cup ; shake them well about, so as to spread them over the surface; reverse the cup, to drain away the superfluous contents, and then exercise your intuitive and previsional powers in discovering what the resultant figures represent.
Long, wavy lines denote vexations and losses, their importance depending on the number of lines.
Straight lines, on the contrary, foretell peace, tranquillity and long life.
Human figures are usually good omens, announcing love affairs and marriages.
If circular figures predominate, the person for whom the experiment is made may expect to receive money.
If these circles are connected by straight, unbroken lines, there will be delay, but ultimately all will be satisfactory.
Squares foretell peace and happiness; oblong figures, family discord; curved, twisted, or angular figures are certain signs of vexations and annoyances — their probable duration being determined by the number of figures.
A number of lines, whether long or short, foretell a happy old age.
A crown signifies honour, and, for politicians, etc., success at court.
A cross denotes news of death, but three crosses in the same cup are symbolical of honour.
A ring means marriage; if a letter can be discovered near it, that will be the initial of the name of the future spouse.
If the ring be in the clear part of the cup, it foretells a happy union; if there are clouds about it, expect the contrary; if it chance to be quite at the bottom, the marriage will never take place.
A leaf of clover or trefoil is a good sign, denoting speedy good fortune if at the top of the cup, and good fortune roportionately more remote as the symbol is nearer to the bottom.
Flowers are commonly the signs of joy, happiness and peaceful life. A rose promises health; a lily at the top of the cup foretells a happy marriage, but at the bottom it portends anger. A shrub signifies delays ; a single tree as a rule predicts a restoration to health, but a weeping willow is a portent of sorrow. A group of trees in the clear part of the cup betokens misfortunes which may be avoided;
several trees wide apart promise that your wishes will be accomplished; if encompassed by dashes, it is a token that your fortune is in its blossom, and only needs care to be brought to maturity; if surrounded by dots, riches may be expected.
A tree beside a house promises you the possession of a country seat or cottage, according to size.
A house beside a circle shows that the former will come into your possession. If there be an X near it, it will be situated in a city or town. If accompanied by triangles, it will be inherited or given to you. If it be surmounted by a cross, you will die in it.
Mountains signify either friends or enemies, according to their situation. The sun, moon and stars denote happiness, success; clouds, happiness or misfortune — according as they are bright or dark. Birds are good omens ; the appearance of one in the cup, typifies a sudden stroke of luck.
Quadrupeds — with the exception of the dog — foretell trouble and difficulties; reptiles mean treachery.
Fish imply good news from across the water, but some authorities interpret their appearance as the presage of an invitation to a good dinner.
A serpent is always the sign of an enemy, and if in the cloudy part of the cup, gives warning that great prudence will be needed to ward off misfortune.
The figure of a man indicates a speedy visitor; if the arm be outstretched, he will be the bearer of a present.
When the figure is very distinct, it shows that the person expected will be of dark complexion, and vice versa.
A heart surrounded by dots signifies joy, occasioned by the receipt of money.
A letter signifies news ; if in the clear, very welcome ones; surrounded by dots, a remittance; hemmed in by clouds, bad tidings and losses; a heart near it, a love letter.
An isolated line signifies a journey, its extent in proportion to the length of the line; dots or small branch-fines signify the obstacles which may be expected therein.
A circle enclosing four points foretells the birth of a child, and this emblem has a profoundly occult significance.
A dog beside a human figure always has reference to a friend.
A man mounted on a horse presages a male person who will powerfully espouse your cause.
An anchor at the bottom of the cup denotes success in business; at the top, and in the clear part, love and fidelity; but in thick or cloudy parts, it means inconstancy.
A crown near a cross indicates a large fortune resulting from a death.
A bouquet, composed of four or more flowers, is the most fortunate of all omens.

Occasionally, the development of the clairvoyant faculty produces lovely landscapes, complex groups of figures, large flights of birds, and a variety of suggestive visions, which, being of a higher character than those previously described, are proportionately difficult to explain, and sometimes transcend speculation. To persons of poetical and romantic temperament, they are, however, eminently suggestive, and are far more highly prized than the common appearances which admit of a facile interpretation.
at August 04, 2017