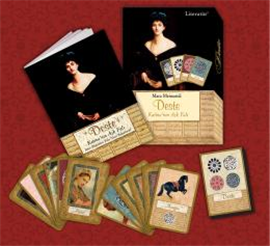 Some time ago a friend posted pictures of her "fortune telling themed junk journal", and I wanted to have my own.
So I started looking for images to be used as decoration.
Found an eBay listing about "Greek tarot, oracle and fortune telling decks". Really nice ones, the seller had several listings, with several decks in each, but way too expensive for me. Anyway, one of these decks was Katina's Deste. Deste means deck of cards, a pile, but it has become to stand for this specific oracle deck.
I started looking for information about this deck. It looked interesting. I found some videos on YouTube. (The ones everyone else English speaking person finds, from Demetra, Chris and Kelly.)

Now, I know some (very little) Greek and Turkish, and I am quite proficient in using Google Translate. So I found this: Katina Fortune Telling Cards
She says that the deck is sentient and will find you. That it will make the meeting between you and it happen. That somehow the events in your life lead you to it. The deck chooses you. You don't choose it. If it hasn't chosen you, and you somehow "force" your way to it - like, for example, you read my blog, and are interested in divination, and find this deck interesting, you will order the deck (many ways of getting it, like Amazon.com), and watch the videos and join the Facebook group and do your best to understand, but the deck didn't invite you - it won't open for you, and it will be just a deck of cards. Of course you can use it, and will get something, but if it wants to work with you, you will get everything. It is seriously powerful.

Now, a true invitation is more than just finding out about the deck as another way of divination. People have been dreaming about the deck. People feel they know it already when they see it. People get "accidental scrying experience" when they touch the cards. You are given the deck without any action from your side.

Deste also arranges that you will get a teacher, you will come into contact with other "Destructors" or "Desticis" (Deck Creator or Collector, Manifester, really, because the Deck isn't created, it is made into reality, someone channels the images; or Deck Reader), and other decks. (A bit like Crystal Skulls, here... :-D)

Also, there is an apprentice period. The deck will test you, your perseverance, your aptitude, your obedience and respect... if it finds you worthy, it will start teaching you.
I mean... It is communicating with me. And I am moved to tears by my awe and gratitude. Seriously. I mean... I am almost 50, a middle-aged woman, who has studied divination since I was 10. I am a hereditary witch of an old Finnish strain. I should know this already. And it's "just a deck of cards". It's not a sentient entity. But... the deck of cards is just a... pale manifestation of the Deck. The Deck itself is somewhere out there, and the pieces of cardstock are a means of communication manifested by the need.

I have found that the deck is very kind, tolerant, patient and forgiving. As long as you respect it and are willing to learn, it will teach you, but it also has a sense of humor. It will "punish" you a little every time you get a bit cocky and start thinking "it's just a deck of cards, and I will use it as I like". :-D

Now, I want to add some cards to this deck. That is the significator card. I want to leave the personnage of the deck to Deste to tell me things.
These are significators from the Kazanlar deck. I want something like that. 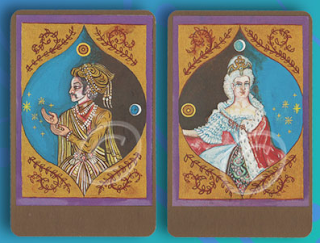 Him and Her Kazanlar Style