Some time ago (1992) there was a "new and interesting deck of cards" introduced to the Western market. Russian Gypsy Fortune Telling Cards. 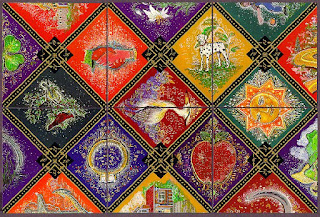 Now, this "deck" didn't got much popularity, because people were confused by the use of words like "cards" and "deck". These aren't cards or a deck of cards. These are tiles. This is more like a puzzle than a tarot layout. Some people find that very confusing and difficult, don't get at all how to read these, find the swirling unnecessary complication and stupid. To me this appeals a lot, and I am very impressed by how much some simple symbols say!

In this deck there are 25 tiles divided in four, fours are made of half of a picture. The divination is akin to reading tea leaves. You lay out the tiles in a square, five by five, and see if any images are completed. If not, you didn't get that symbol in "your teacup". Some times you get no symbols at all. It's like picking an empty rune in rune casting. It's not a good day to divine, you are breaking rules and asking the same question too soon, or there just isn't anything of importance to be told to you.

The symbols are somewhat similar to the LeNormand symbols, but some are different, even totally opposite. I could post a shortlist of the meanings, but I won't, because that would be infringing copyright, because miss Touchkoff has written her own version and understanding of the symbols, they are not exactly like the Russian general divinatory symbols.
(BTW; her name sounds more like toots-coff than touch-khov. It's t, ou like in you, ch and k like in Chekhov, off like in off - so it's not "ov" like in Chekhov, but "off". Actually it's exactly like in Chekhov, but she chose to write it "off", so f it is. In fact, it would be better to put in the f in Chekhov as well. Because that's how Russians pronounce the -ov, -of, -off ending of their names.)

Now, this doesn't really matter, if you have learned anything from this blog :-D YOU create your symbols. The universe will align to suit you, and will force the tiles to mean what you think they mean... But - I would recommend you get the book to learn the "correct" meaning of the symbols. After all, the "deck" creators made it with intention, and that matters. It might take some time for the universe to adjust and assimilate this deck to your world of symbols. Also, I think it's interesting to create new associations and increase one's collection of symbols.

There are several good reviews of this deck and some general advice on how to use it.
Layout and sample reading
How to Do a Reading
and here is an interactive free layout online - it shuffles and lays out the cards for you, and you can turn the cards in place to get the symbols, but it doesn't tell you what the cards mean.

Why I am talking about Russian solitaire tiles is that this is an actual Russian divination method, and they call it "solitaire" or "patience". And there are A LOT of different decks produced in Russia...
Take a look at this thread: They are posting photos of the different decks and lists of the meanings of the symbols. It's in Russian, but you can google translate it, if you wish.

Now, I have learned so much about this divination method lately, and would like to share with you some of my insights and ideas.

It matters how much you need to move the cards to get the symbols.
If the symbols come upright and connected right away, this is a strong symbol, important message, and a significant part of the answer.
If the symbols are broken, this implies blockage or denial, someone is trying to hide things.

You read the symbols in order - from left upper corner to right down corner, from left to right.  Note that you read the SYMBOLS, not the TILES - there are five rows of TILES, 9 rows of SYMBOLS.

If there are tiles that would make a symbol but are separated in the same column or row, it means that that could have happened, was about to happen, but didn't, won't. For example, there is the ring in the first tile on the row, and also on the fourth tile, it means that the person thought of proposing but changed his/her mind.

Also, the tiles next to a connected symbol offer more information about the situation. Now, the images on cards that make connections are always the same, BUT THEY ARE NOT IN THE SAME POSITIONS ON THE LAYOUT NOR TO THE CARDS NEXT TO THEM.
This is why the edge cards are important, THE “CARD NEXT TO THEM” IS NOTHING. The empty rune. Void.

I mean... I just love divination! The stories that are being told are so layered and complex, and all you have are some symbols! :-D