Physiognomy from Lilly's Book of Knowledge

From The Lilly Book of Knowledge,
Published in New York 1806

Written by Erra Pater, a Jewish Doctor in Astronomy and Physic,
Made English by W. Lilly, Student in Physic and Astrology. 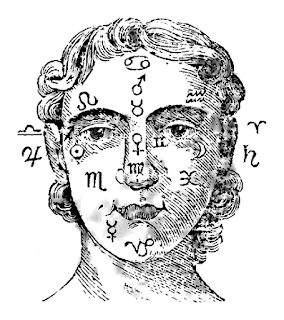 Physiognomy is an ingenious science of knowledge of nature, by which the inclinations and dispositions of every creature are understood; and because some of the members are uncompounded and entire of themselves, as the tongue, the ears, etc. and some of a mixed nature the eye, the nose and others, we therefore say, that there are many signs that agree and live together, which inform a wise man how to make his judgment, before he be too rash to deliver it to the world.
Nor is it to be esteemed a foolish or idle art, seeing it is derived from the superior bodies, for there is no part of the face of man but what is under the peculiar influence or government, not only of the seven planets, but also of the twelve signs of the zodiac, and from each governing part it is the nature and inclunation of a man or woman plainly foretold, if the person understaking this province, or pretending to it, be an artist. Which that my reader may attain to, I shall set these things in a clearer light by the following figure.

By this the reader may see at the first glance, that the forehead is governed by ♀ Mars; the right eye is under the dominion of ☉ Sol; the left eye is ruled by ☽ the Moon, or Luna; the right ear is the care of ♃ Jupiter, the left of ♄ Saturn; the ruling of the nose is claimed by ♂ Venus (which by the way is one reason that in all unlawful venereal encounters, the nose is so subject to bear the scars which are gotten in those wars) and the nimble ☿ Mercury, the significator of eloquence, claims the dominion of the mouth, and that very justly.
Thus have the seven planets divided the face among them, but not with so absolute a sway, but that the twelve signs of the Zodiac come in for a part; and therefore the sign of ♋ Cancer precides in the uppermost part of the forehead, and ♌ Leo attenting upon the right eye-brow. ♐ Sagittary does upon the right eye, and ♎ Libra upon the right ear; upon the left eye and eye-brow, you will find ♒ Aquarius and ♊ Gemini, and ♈ Aries taking care of the left ear, ♉ Taurus rules in the forehead, and ♑ Capricorn the chin, ♏ Scorpio takes upon him the protection of the nose, ♍ Virgo claims the precedence of the right cheek; and ♓ Pisces of the left; and thus the face of man is canton'd out among the signs and planets, which being carefully attented to, will sufficiently inform the artist how to pass a judgment. For according to the nature of the sign or planet ruling, so all is the judgment to be of the part ruled; which also those that have understanding know easily how to apply.

I shall now proceed to give a particular judgment of the several parts of the body: And first. Of the head.

A large head shews a person stupid and of a dull ap∣prehension, also a very small head signifies the same; but the head of a man being neither great nor small, is the prognostic of a wise man; for all extremes are irregular, and a deviation from nature; and experience has made it manifest, that a great head and small mem∣bers, do always produce much indiscretion and folly, both in man or woman; but we must also consider the several parts of the head: And first,

Of the Forehead.]
A large forehead shews a liberal man; but the forehead narrow, denotes a foolish per∣son: A long forehead shews one apt to learn, and a high forehead, swelling and round, is a sign of a crafty man, and a coward; a forehead full of wrinkles, shews a man to be envious and crafty.

Of the Eyes.]
The eyes being moist and clear, shews mirth, good manners, and an honest life, but if the eyes be declining and looking downward, or red and very great, they betoken fleshy lust; small hallow eyes signify covetousness; grey eyes an evil man, hollow eyes a crafty man, rolling eyes a wicked and vicious man, black eyes denote a sharp and piercing wit, but one lustful and incontinent; great eyes denote sloth; trembling eyes sluggishness; glittering eyes betokens drunkenness; smilling eyes shew a merry life; eyes of divers colours,, and small, denote one crafty and flat∣tering; eyes turned towards the nose, shew a man given to women; great drooping eyes, with an unsta∣ble countenance, shew a man mad; the circle of the ball green, declares a crafty wicked man, and a thief; moist eyes denote stoutness of stomach, perfect speech gluttonous and mad; high eyes, large, clear, pure and moist, are tokens of circumspection, diligent persons, and lovers; eyes always running, without sickness cause it, shew foolishness; small and hollow eyes, the cove∣tous, deceitful, and angry man; cheerful eyes betoken just men, of pleasant disposition, kind and holy; twink∣ling eyes, shew a thief and one that lays wait to catch and ensnare men; blear eyes signify a whoremas∣ter.

Of the Eyebrows.]
Upright eyebrows are amiable, but the eyebrows hanging over, shew an effeminate person. The brows very hairy, denote an impediment in his speech, and the brows being extended to the temples, shew a man to be a sloven, and uncleanly.

Of the Ears.]
Open ears shew a man to be without reason and understanding; great ears an unwise man, and small ears a fool; square ears, and of a middle size, shew a learned and wise man.

Of the Nose.]
A great nose shews a good man; a little nose a deceitful person. A sharp nose denotes an angry person, and a scold; thick and low, a person of bad manners. The nose stretching to the mouth, de∣notes honesty, strength, and aptness to learning. A nose like an ape, betokens a libidinous and riotous person; a long crooked nose, magnanimity and gener∣osity.

Of the Mouth.]
A very big mouth, with the upper lip hanging over, signifies a man foolish and unsteady, also a rash man, a babbler, a glutton, and an ungodly man. An indifferent large mouth, sheweth a bold and courageous man, a warrior.

Of the Lips.]
Thin lips with a little mouth, shews an effeminate person. Slender, thin and fine lips, be∣tokens eloquence; fleshy and great lips, a fool; and those whose teeth bear up their lips, are generally con∣tumelious, slanderers, unfaithful, also addicted to the love of women.

Of the face.]
A lean face is a token of a wise man; the face plain and flat, denotes a man of strife: The face without any rising or swelling, denotes a person injurious and unclean; a fleshy face shews a man apt to learn; a sad face sometimes denotes foolishness, and sometimes wisdom. A fat face shews a man to be a liar, and foolish; a round face signifies folly; a great face shews a man dull and slow about business; a well proportioned face shews a person to have virtuous qual∣ities, and to live a commendable life, whether they be rich or poor.

Of the Neck.]
A neck inclining to the right side, shews a temperate man; but turning to the left side, a fool, and a man given to unlawful love. A crooked neck shews a covetous man. A thick neck denotes a rude, barbarous, ill natured man. A long slender neck shews a man to be a coward. A thick and long neck, a furious and stubborn person. A mean neck, a strong and virtuous man, and one inclined to learning.

Of the Breast.]
A broad breast is always good, and presents magnanimity, boldness, honesty and courage. A narrow breast denotes imbecility, or weakness, both of body and mind. A pursy or gross breast, shews a man to be moross, cross and void of pity. The pap• or dugs hanging down from the breast, shews a violent choleric man.

Of the Back.]
A broad back is a sign of strength; but the mean proportion of both back and breast is always commendable. A crooked or hunch back, is generally a token of a nigardly and covetous person.

Of the Belly.]
A lank belly, with a high breast, denotes a man of understanding, courage, counsel; but a great belly shews an indiscreet, foolish, proud man, and given to luxury.

Of the Arms.]
Very long arms are a sign of boldness, strength and honesty. Short arms denote a fomenter of discord and strife among friends.

Of the Hands.]
The hands very short, denote a clownish, rude, ill bread person; and if fat and fleshy, with the fingers so also, it shews they are inclined to theft. Small hands and long fingers denote a person of a genteel carriage, but crafty.

Of the Legs.]
Large and well set legs denote bold∣ness; large legs and full of sinews, shew fortitude and strength. Slender legs denote ignorance; short and fat legs cruelty. Legs crooked and hollowed inward∣ly is a sign of very ill men. Soft and swelling legs shew a man to be of very ill manners. The skin cross and short, with a sharp heel, and fat thighs, denotes madness to happen to that party.

Of the Feet.]
Small and slender feet denote hardness, but the feet full of flesh declare foolishness.
at April 02, 2016

Email ThisBlogThis!Share to TwitterShare to FacebookShare to Pinterest
Labels: physiognomy