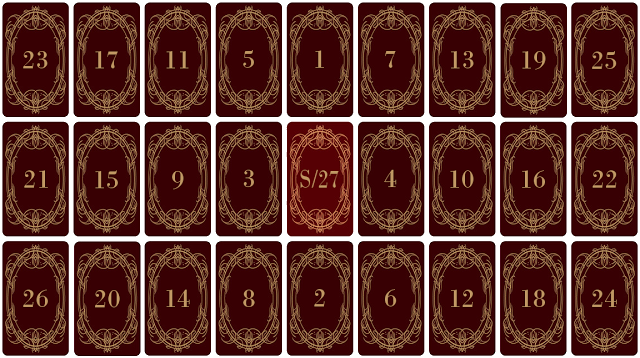 This is a layout called Tanridna (Goddess)

It has an interesting order of laying out the cards. You do it in crosses. First the significator. Then above, below, left and right. Then left up, right down, right up, left down, and you continue with this again and again until you have three rows of nine cards on the table; 27 cards. The significator doesn't have a number, which is why the 27th card you put on the table has number 26, and card number 27 is in the middle. You put the last card on the significator upside down, to read it last, after you have read everything else.

S is the significator. Usually people choose a card from the "court" to represent the person, but Katina apparently used her own picture.

How to read this?

In this spread everything is connected. The cards next to other cards directly influence each other, but all the cards that touch each other impact the reading. Cards that are over a card have more power than cards that are under a card.
So you read this "in crosses", five cards forming ✙ or X. You can also read it "in triangles", like [9, 3, 11] or [17, 21, 9] or squares, like [7, 13, 4, 10]
Now, this is done only if you don't think you have enough information. There is no need to complicate things. 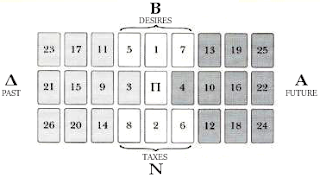 Then you read what's above the Querent's head, cards 3, 1 and 7. These are the thoughts occupying the Querent's mind, that are related to this question.
1 indicates something essential to the reading and 5 and 7 support it. 1 is usually an event or a person and 5 and 7 are emotions, mood, influence, how "it feels".

After that you read diagonally - 5 and 6, 7 and 8. These are still feelings, fears, thoughts, hopes, wishes, worries, what's going on in your head. 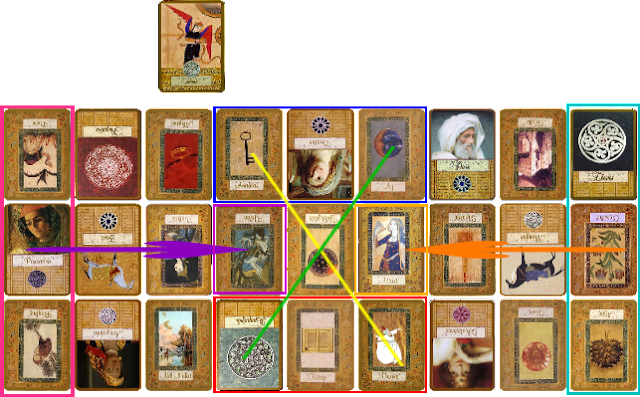 After that you will read the immediate future and the immediate past; cards 4 and 3. This is something that has happened or will happen within 10 days, probably even less time than that, more like "yesterday" and "tomorrow".

The "foot row", the row under everything, can be read in two different ways; it can be a support, the ground you build on, or it can be what is being trampled on, ignored, oppressed, suppressed. In general this row indicated underlying, subconscious influences, hidden feelings and motifs.
The "head row", cards above the middle line are strong influences or extra information, and the effect is stronger than the middle line card - so if the mid card is negative and the top card positive, then the even is positive; if the mid card is positive but the top card negative, then the event is negative

After you read the immediate past, 3, you will read the timeline, the mid row past, from the first card on the row, 21 through 13 and 9, to 3.  It is a straight timeline; the left-most card (21) is the defining moment in your life that started the line of events leading to this moment and causing the Querent to ask this question. It caused 19, that lead to 9, and 3 is a direct consequence of that.
The cards above and under these define them. It is possible to read the row on top as this as well - 23 being the defining moment, 17 following from it, then 11 and leading to 5.
(You can also read both timelines and understand that they are inherently combined. One timeline wouldn't have happened without the other.)

So - the image above with Deste cards is a real reading I did. One can read it like this:
23 - camel reversed - lack of resources, poverty
lead to 17 - ruby reversed - broken heart - lead to 11 - ring reversed - problems in marriage - lead to 5 - key - getting out of the "jail" of obsessive thinking, problems, heartache, problems in marriage etc.
and
21 - Parsadra - the Bitch who talks too much - lead to 15 - Zara reversed - someone who will hurt you, cause trouble, not help you, which lead to 9 - Vaalinde, which eventually caused 3 - serpent reversed - the "snake" bit you in self defence, not to hurt you.

(I'll take the underlying cards as well, to further define the meaning
26 - owl reversed "If this card appears on another person of the Deste cards during a reading, then it means that this person is crude, and illiterate." - it refers to a person who doesn't know what she's talking about, but believes she knows everything.
20 - Assyranta reversed - untrustworthy woman, "bad mother"
14 - Nile - work, fertility, bliss
8 - Emerald reversed - success, victory, but it will take time and it is somewhat limited)

lack of resources, directly associated with the bad-mouthing bitch, who thinks she knows everything, but knows nothing. (I know who this is, and she really is a stupid bitch.)
lead to
broken heart, problems in love due to an untrustworthy woman (I know who this is. I trusted her when I shouldn't have, and I did break my heart.)
this lead to problems in marriage, depression, sadness, misery, pain and really terrible, horrible time in my life - but it was all standing on the "work" card, which promises bliss from work.
This lead to a lot of good things. Because I worked my butt off to save my marriage and my sanity and peace of mind, I "got out of the jail", I realized these people were hurting me out of ignorance, lack of kindness and fear, not because they intended to hurt me, and even when it took time, I am victorious.

Remember that all this has already happened.

The last column is carved in stone. This will happen and nothing in the world can change that. (It is possible that you misinterpret it, and will understand what it really meant only when it happens, but it will happen.)

Now, when you have read all that, you will turn the card number 27, the card over your significator card right way. This is the Destiny. This is the outcome. It is NOT read associated with the cards next to it, it is connected with everything. It is sort of on a layer of its own. It is a general "keyword" to the reading if you so wish.

After this you pick one of the Tzans or Helper Spirits. This gives you advice on what you should do to get the best possible outcome for you. This is direct advice. Selana here says "Like the moon is changing, you have to change. Think positive, enjoy everyday life, be grateful" Count your blessings. Be grateful for what you have, now, and don't waste your happiness in dreaming about things that might have been. "If you do this", she says, "I promise you bliss".

With Katina's Deck it is not only acceptable but advisable to ask for more information by turning more cards. For example, let's say that I want to know more about who Assyranta is in the reading. I ask the deck that, turn a card, and get Tagral. Now, Tagral is "the provider" or "the boss". This gives me enough information to know for sure who Assyranta is.
Now, every card you turn after the layout is about the future, even when it's about cards that are telling about the past. Now, this specific woman is not relevant in my future (most likely), but there are people who are in the same position as she was and I believe that refers to all those people - meaning also, that the specific woman was not just that specific woman, but also what she represented.

You can ask as many defining questions as you like, and use all the cards in the deck. Usually one doesn't need to use more than the 29 cards (27 cards in the layout, significator and Tzan), but you can use all 68 cards if you feel you need to.
at October 02, 2017