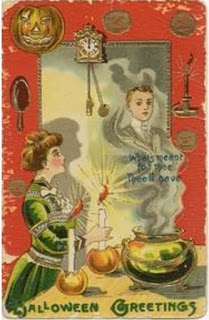 Before trick-or-treat, the sugar lobby, and mass-produced David S. Pumpkins costumes took over Halloween celebrations, fortune-telling games were one of the most popular ways to enjoy our spookiest holiday.

This was especially true in Ireland, Scotland, and Wales. Halloween is rooted in the festival of Samhain, the Celtic New Year, in which worshippers believed the gates between our present reality and the netherworld briefly shut down. It was a night for consulting the spirit realm for advice—especially on love and marriage. In fact, Halloween was just as romantic as our modern Valentine’s Day, if not more so.

With Lisa Morton’s exhaustive book The Halloween Encyclopedia as our guide, we’ve cobbled together some of the best romantic divination techniques from the Celtic New Year celebrations. Keep in mind that as far-fetched as some of these fortune-telling games may seem, they were largely viewed as playful parlor games—opportunities for friends to set potential suitors up, or for a bashful lad or lass to spark a courtship. When playing a game, “a clever hostess will send two unsuspecting lovers by different doors;” Martha Orne suggests in Hallowe’en And How to Celebrate It, “they are sure to meet, and not infrequently settle matters then and there.”

Perhaps it's time to bring a few of these back? 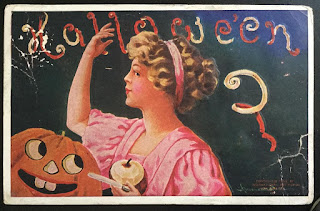 “If someone peels an apple in one piece and throws it over his or her shoulder or head,
it will fall in the shape of a future love’s initial.”

1. Acquire a newborn baby. Encourage it to sip from a bowl. Afterward, return the baby. Retain the bowl and fill it with water, then cut all 26 letters of the alphabet from a newspaper or magazine—or write the letters on 26 slips of paper—and place the papers into the bowl. Leave it to sit overnight. The next morning blindfold yourself, dip your hand into the bowl, and pull out the same number of slips as letters that are in your name. Using those slips, you should be able to spell the name of your future spouse. (You can thank the people of Newfoundland for this custom.)

2. Eat an entire salted herring, bones and all, in three bites. Do not drink water. Go to bed. In your dreams, prophetic visions of your future spouse shall appear. (Also possible: indigestion.) 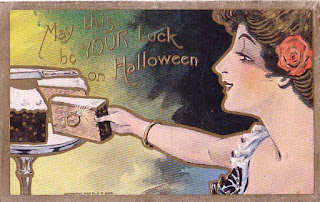 3. Find a blackberry bush. Crawl underneath the branches. In the moonlight, you may find the shadow of your future beloved. (Also possible: blackberries.) 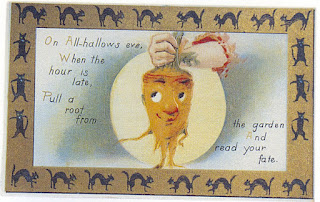 5. Trespass on your neighbor’s garden. Strap on a blindfold, and began searching for kale. Upon finding the vegetable, attempt to pull the kale from the dirt. The shape of the kale's root shall foretell your future: “A straight stalk foretold a tall straight handsome mate, and dirt clinging to the kale promised money,” Morton writes. (Don’t snicker: This divination was once a popular matchmaking tool in Scotland, and, if you’re of Scottish descent, there’s a chance that you owe your entire existence to a stalk of kale.)

6. Step outside and pluck a hair from your head. (If balding, skip to the next divination.) At nightfall, toss the hair into the wind. The direction the hair flies will indicate the direction from which your future spouse will come. In 1714, the English dramatist John Gay mentioned this custom in this poem:

I pluck this lock of hair from off my head
to tell whence comes the one that I shall wed.
Fly, silken hair, fly all the world around,
Until you reach the spot where my true love is found. 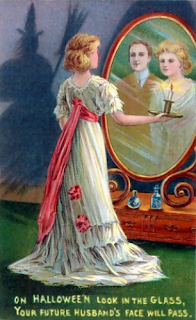 7. Spread a fine layer of cornmeal near your bed. (People with carpet can probably skip this one.) Sleep. In the morning, the name of your future spouse will be scribbled in the powder. (This bit of divination was supposedly practiced by children in the American South.)

8. Grab an egg, prepare a glass of water, and school yourself in oomancy! Crack the egg and carefully drip the whites into the water three times: The goop will contort to form the initials of your future beloved. (But be careful: Morton writes of a young man who was so disturbed by his eggy divination, he “drank heavily and became a beggar who committed suicide by downing laudanum.” The girls of Salem also attempted to read egg whites, and, well, we know how that turned out.) 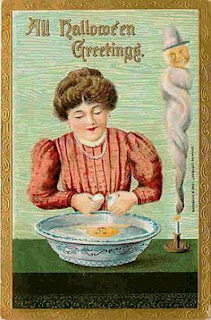 9. Book a ticket to the Scottish Highlands, specifically to Ross-shire where this trick supposedly originated. Find a field in which the furrows run north to south. Wait for dark. Enter the field from the west, and gently walk over 11 furrows. Stop at the 12th, wait, and listen for your fortune: If you hear sobbing, you may die early; if you hear music, your future will be joyful. (And if you hear a man or woman grumbling about getting off their lawn, your future likely holds a trespassing charge.)

10. Find a snail. Go to the hearth, scoop up ashes, and scatter them across a plate. (Hearthless? Use flour!) Place the snail on the plate and go to sleep. In the morning, check the snail’s slime trail: It will have spelled the initials of your true love. 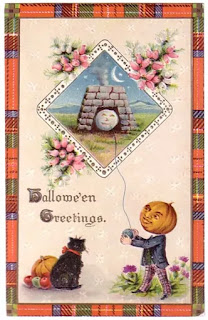 11. Locate the nearest lime-kiln. Then locate the nearest arts and crafts store and buy blue yarn. Throw the ball of yarn into the kiln while grasping the opposite end. Reel in the yarn. When you feel a tug from the other end, ask for the name of your future beloved, and a disembodied voice will belch his or her name. (This tradition originates in lower Scotland, where it was believed that mythical household goblins called “Brownies” lived in the kilns—and, well, everywhere else.)

12. Buy a knife and find a field of leeks. At night, walk backwards through the field, and stab one of the leeks with the knife. Hide, then watch. According to Celtic lore, your future spouse will walk through the field, pick up the knife, and chuck it to the middle of the garden. 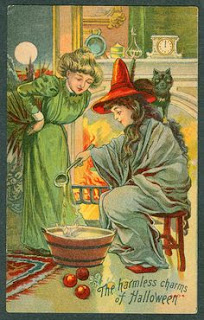 13. Visit a farm and pull up a stalk of oats. If the stalk is missing the tiny seeds at the top—what the Scots called the pickle—then you’ll lose your virginity before marriage. (For people who have already sowed their oats, pulling up a stalk of oats is probably unnecessary.) The Scottish poet Robert Burns refers to this custom, alluding to a woman’s virginity as the “tap-pickle":

14. Attain a willow branch or wand. While holding it in the left or right hand, run around your house three times. Meanwhile, whisper, “He that is to be my goodman, come to grip the end of it.” During the third lap, the fetch—that is, the living spirit—of your future spouse will appear and grab it. (Willow is a interesting choice of wand, since it used to be a symbol of curmudgeonry. In the Scottish Highlands, placing a peeled willow wand on your door was a sign that you wished nobody to enter your house.) 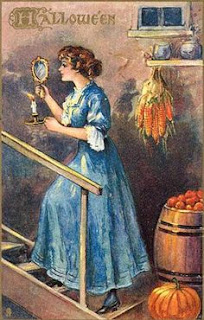 15. At midnight, scoop up a heaping spoonful of salt and insert it into your mouth. Do not swallow. Then light a candle, grab a mirror, and, while holding both candle and mirror in your hands, begin walking backward into the cellar. Watch the mirror. As you reach the bottom, you’ll see the face of your future spouse staring back at you. (According to the aptly titled Book of Entertainments and Frolics for All Occasions, “This is most easily accomplished if there be a tacit agreement that some cavalier shall be in waiting for the inquiring maid.”)

16. Place two nuts on a fire and recite these words: If you hate me spit and fly; if you love me burn away. If the nuts roll apart, you may separate soon from your spouse. If both burn, your relationship is secure. A similar divination involves placing two peas on a red-hot shovel. 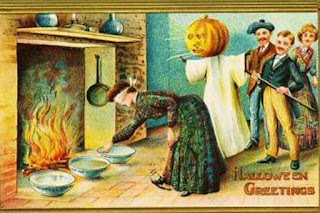 17. It’s time to break out the Luggie Bowls! Place three bowls side by side: Fill the first with clear water, the second with dirty water, and the third with no water at all. Blindfold yourself and ask a friend to rearrange the bowls. Dunk your left forefinger into one of the bowls. If you choose the clear bowl, you’ll enjoy a happy marriage. The dirty water, on the other hand, indicates an unhappy marriage, and the empty bowl means no marriage at all. Robert Burns describes Luggie Bowls in a poem:

In order, on the clean hearth-stane
The luggies three are ranged,
And every time great care is ta’en
To see them duly changed:
Auld uncle John, wah wedlock’s joys
Sin Mar’s year did desire,
Because he gat the toom-dish [empty] thrice
He heaved them on the fire
In wrath that night.

18. Pour half a pint of high-proof brandy in a dish. Ignite it. Throw a handful of raisins, nuts, candied figs, and other tiny fruits into the blaze. Then gather a group of friends and attempt to remove as many items as possible, trying your best to toss them into your mouth without getting burnt. Whoever retrieves the most fruits and nuts is destined to meet their true love in one year. (In Britain, this game, known as Snap-Dragon, was mostly a Christmas Eve parlor game—Charles Dickens wrote about it in The Pickwick Papers—but, in the United States, it supposedly became a Halloween pastime.) 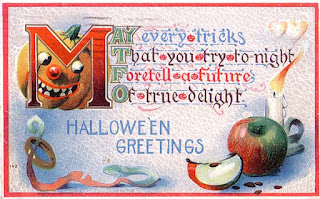