In my mind the best way of learning how to use the divination tools, is to follow with when someone else does it. So here comes a sample reading of the Russian Gypsy Fortune Telling Cards.

I am going to assume you are familiar with using Lenormand cards and the symbolical meanings, so I will not talk much about the meaning of the symbols.

This is the layout. You mix the cards and then put them in 5 by 5 grid. It doesn't matter which way the cards are. There isn't really up and down with these cards. 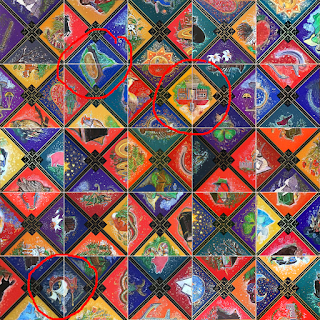 First you look at the symbols that appear whole from beginning. In this layout there's the bread, the house and the ship. These symbols are very strong, the most important part of the message.

The bread is a symbol of stability, prosperity, generosity, happiness and food. It is angled to right, which means happiness and prosperity.
Then there's the house or home. It stands for home or business, what provides us with security. It's upside down, which means failure of a project planned in advance.
On the last row is the ship. The ship means adventures. The ship is also upside down, and means material loss or unsuccessful work.
I suppose it means I won't be finishing my book this month either :-D

Next you turn the tiles so that you complete the pictures that can be completed. In this layout there's three pictures; the owl, angled to right, the clover, also angled to right, and at last the moon, upright.

the owl symbolizes intelligence, wisdom, planning, strategies. Angled to the right it means your plans will be discovered.
the clover stands for luck, of course. Angled to right it means that a misunderstanding endangers our happiness.
the moon represents peace and fertility. Upright it means simple, but happy life. 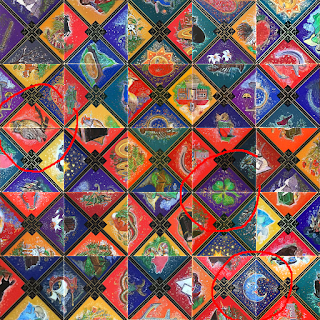 Then you check the pictures that are in the same row or column but do not touch. These are "almosts" - something got in the way.

The demons are inner conflicts. The dagger is grave danger to my pride.
The ring symbolizes commitment, and the scales justice and balance.
So - these things won't happen, because of something else. They almost happened.

You can look at the pictures that are in between these, to find out more information about what stopped it. Basically, the dagger and demons stopped each other. The bread is somehow involved as well. The ring and the scales were cut by the house.

And while I was doing this, I noticed two pictures that touched, but I had missed - money on the last row, and coffin under the clover - I have to break the clover to make the coffin.
The money to the left means unexpected income. The coffin to the left means painful event that cannot be avoided. Now, because we formed the clover first, the coffin doesn't happen. A misunderstanding causes unhappiness, but I assume the coffin would have been worse.

I know I should have asked a question, it would be much easier to interpret than just rabble the meaning :-D Nevertheless, I think this is about my November and as the most important question right now is NaNoWriMo, then I am going to take this as that.

Next you check what cards are touching your completed picture. Ignore the images in the tile itself, because those are always the same, and don't matter. Only those that touch the tiles forming the image matter. For example, the bread is touched by the dog, the stork, the book, the heart and the snake - and nothing. Having the picture forming on the edge of the layout has meaning as well. That empty space is like 0 card, the Sacred Squirrel, the Fool. 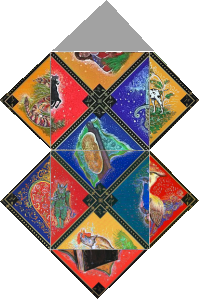 You might find it easier to interpret if we "translate" it to Lenormand cards - after all, these Russian Gypsy Fortune Telling Cards share quite a lot of the symbolism with Lenormand cards. (I am using the Malpertuis Lenormand deck (because of the squirrel), and because there is no "bread" in Lenormand, I made that card up.) 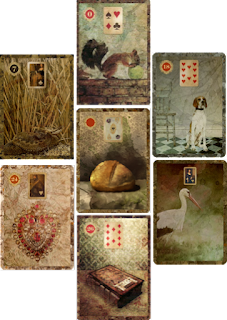 I would say that in this case the happiness and prosperity promised is governed by the happy go lucky squirrel thoughts, and will produce a book. (NaNoWriMo :-D)

Snake and dog: To desire the success for loyalty, friends, maybe fans?

Snake and stork means a very strong desire that has been going on for a long time. Oh, yeah. To me, the stork also stands for babies. So let's hope this means I will actually succeed writing my book :-D

Now, in the Russian Gypsy Fortune Telling Cards, the snake doesn't stand for longing, but a snakish person, infidelity, poisonous words. I don't think I'll use that, though. I think I like the desire reading more :-D
(This is divination, and all the symbols are personal, after all.)

The house is touched by sun, lilies, ring, clover, crayfish, and a child. The others are pretty much as in Lenormand, but the crayfish represents out destiny and our ability to react to life. This to me is very positive as well. (I have a project together with my husband, BTW.)

The ship is touched by a dog, a forest, and a fish, and three squirrels :-D The forest symbolizes people around us.

owl: switches (whip), demons, stars, handshake and squirrels
In this the branches stand for family members, not switches. The handshake means union and co-operation. Demons are inner demons, negative thoughts, fears, conflicts.
clover: fish, bouquet, mice, bear, book, horseshoe. The horseshoe symbolizes luck in an unexpected way. I would say I should be afraid of the little mice nibbling my time away, but if I just put in the work, it will work out.
money: birds, squirrels, switches (whip) and child
moon: stars, bear, squirrels, letter - stars symbolize the destiny as end result, bear is hard work, letter is news.

Frankly, I think this looks really good. If one doesn't care about which way they lay. I have to say that it looks pretty obvious - I am going to finish my novel if I just write. I need to look up for negative thoughts and frivolity, but basically the only thing that makes me fail is if I don't write :-D Duh! :-D

Do you have any questions?

P.S. One way of reading these is that if you have to break one picture to create a new one, it means that a new situation replaces the old one.