Although telling fortunes by consulting the patterns formed by tea-leaves on the base and sides of a cup is often regarded as drawing-room entertainment, it is not purely an amusement. The tea leaves can act as a medium through which the clairvoyance of the reader is stimulated so that he or she is able to reveal truths that would otherwise remain hidden; or the figures formed by the leaves may be believed to reflect patterns that exist in the astral. The method used in tea-leaf reading is time honoured and simple. The client inverts her cup, turning it round three times; she places it on the saucer and then taps the bottom three times with her left index finger. The clairvoyant, who is in a light trance, picks the cup up and turns it round so that the leaves can be inspected. 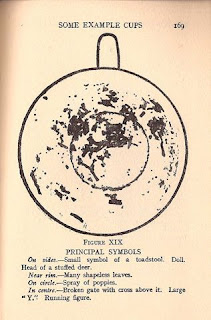 All tea leaf readers have their preferred methods of interpreting the patterns made by the leaves, and only some general indication of their meaning is given here:

Chain of small leave: A journey, travel; if two larger leaves are in close proximity, the excursion is mental and not physical.

Serpentine chain of small leaves: a visit to the mountains; if two larger leaves are in close proximity, there will be ups and downs in daily life; inability to settle down.

Three small leaves close to one leaf: A man.

Two leaves close to a small leaf: A woman.

Group of small leaves in a triangular pattern: A child or children.

Heart: Love; a heart broken or crossed by a chain of leaves represents a broken love affair or divorce.

Triangle: Emotional involvement; jealousy; rivalry. If pointing downwards this shape indicates a menage a trois, if upwards, ambition and success are suggested.

Square: Several different possibilities are suggested by this formation; it may mean that the person concerned is well-established, conservative and solid character. Bit it can also imply a need for protection, or the client's failure to excel in his career.

Star: Great success; a sign of genius; spiritual enlightenment. However, if it falls on or near a heart formation, the passions may be crushed and replaced by a life of asceticism.

The appearance of more complicated symbols or geometric signs needs profound study; because of their rarity they are extremely significant.

Many leaves spread all over the cup: A rich or confused character; extravagance; negligence; generosity.

Very few leaves in the cup: Clarity; direct action in the future. However, this also indicates poverty in emotional life, and if the
leaves seem to arrange themselves in a provocative way they must be read with great care so that they offset the poverty of the all-over pattern.

Cross: This means that the client is at a crossroads in life, and that a personal sacrifice may be necessary. If this pattern is in conjunction with one large leaf, it can signify death. However, care and tact should be exercised in making such an interpretation, and it should be remembered that the possible death is not necessarily that of the client. Other leaves close by will ward off danger, and show a remedy for whatever ill is likely to befall him.

Circle with a cross on it: Enforced confinement, possibly in a hospital, prison, or other institution.

Two parallel lines of leaves: A propitious journey; dreams that will come true; a long and happy life. Reinforcement of all else seen in the cup.

Flowers: Joy; an engagement and marriage.

Bottle: Excess; flirtation at a party. 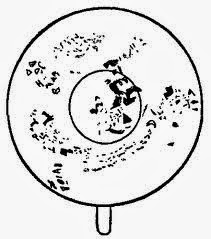 image from "Tea-Cup Reading, and the Art of Fortune-Telling by Tea Leaves"

There are other general indications:

Time is represented by the different levels of the cup. The rim is the present, and below this lies the near future, while patterns formed on the base refer to events that are many years ahead.

Place is indicated by the parts of the cup in which the leaves settle. Those nearest the handle tell of events that affect the home; the leaves on the sides suggest distance according to their proximity to the handle, and those on the base show the place of birth, nationality and hidden nature of the client.

Letters of the alphabet represent the initials of people concerned in the reading; the hearer they are to the handle, the closer their relationship to the client.

Clear symbols are lucky, with the exception of those that represent illness or death.
Faint symbols tend to be unlucky, suggesting a weak character or lack of purpose.

Email ThisBlogThis!Share to TwitterShare to FacebookShare to Pinterest
Labels: tasseography