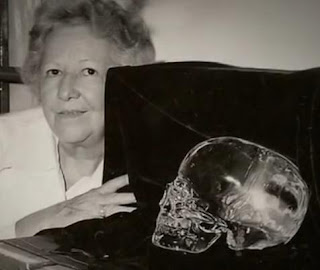 The famous Crystal Skull is an ancient Mayan made from rock crystal. The skull was discovered by explorer F.A. Mitchell-Hedges in 1927 at Lubaantun, British Honduras.

The skull was shaped by a succession of Mayan priests from a large block of pure crystal. It is thought it may have taken over 150 years to complete the skull.

The skull is said to bring a curse on those who mock it. Observers have reported sounds, odours and amazing light effects. Laboratory tests that were carried out by Hewlett-Packard Company, Santa Clara, California reveal the skull has optical properties which would be virtually impossible to duplicate with modern day equipment.

There is a similar but rougher counterpart to the Mayan Skull. Discovered in 1889 in Mexico it is much cruder in execution. It is currently on display at the British Museum of Mankind, in London.

There is also the Paris Crystal Skull. A single piece of clear quartz held in the Trocadero Museum in Paris. It came allegedly from a soldier of fortune in Mexico in the late 1880's. It has the most primitive of facial features and design.

The Amethyst Crystal Skull is a single piece of amethyst crystal discovered in a Mayan cache of artifacts in Mexico by a Mayan Brotherhood in the early 1900's. Features are the circular indentations in the temple and a white squiggly line that goes the circumference of the skull. 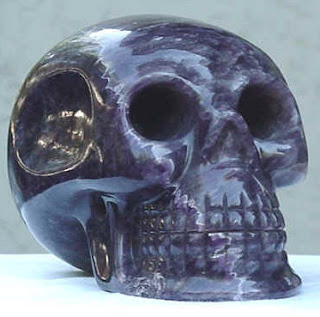 There is said to be a total of thirteen crystal skulls in existence today.

(Now, why is this on this blog? People say these skulls are extrapotent "crystal balls", especially when lights and sounds are used to amplify the effect. Who knows.)
at March 06, 2014

Email ThisBlogThis!Share to TwitterShare to FacebookShare to Pinterest
Labels: scrying