The Cup of Jamshid (Cup of Djemscheed or Jaam-e Jam, in Persian: جام جم) is a cup of divination, which in Persian mythology was long possessed by the rulers of ancient Greater Iran. The cup has also been called Jam-e Jahan nama, Jam-e Jahan Ara, Jam-e Giti nama, and Jam-e Kei-khosrow. The latter refers to Kaei Husravah in the Avesta, and Sushravas in the Vedas.

The cup has been the subject of many Persian poems and stories. Many authors ascribed the success of the Persian Empire to the possession of this artefact. It appears extensively in Persian literature.

The cup ("Jām") was said to be filled with an elixir of immortality and was used in scrying. As mentioned by Ali-Akbar Dehkhoda, it was believed that all seven heavens of the universe could be observed by looking into it (از هفت فلک در او مشاهده و معاینه کردی). It was believed to have been discovered in Persepolis in ancient times. The whole world was said to be reflected in it, and divinations within the cup were said to reveal deep truths. Sometimes, especially in popular depictions such as The Heroic Legend of Arslan, the cup has been visualized as a crystal ball. Helen Zimmern's English translation of the Shahnameh uses the term "crystal globe". 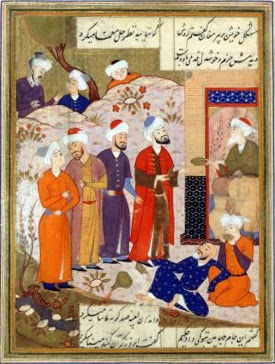