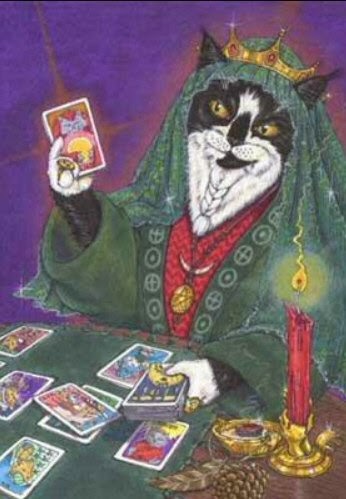 "I have put tarot first because it's my favorite form of divination. So let's dive into the mechanics of using tarot. The first step is acquiring a deck. When I first started using tarot finding a deck was a lot more difficult than it is now. Back then they were only available in occult book stores and the selection was fairly small (Rider-Waite only usually). Now tarot decks can be picked up in nearly any bookstore that has a New Age section and the variety of decks is amazing! This is a fantastic development, but it can be confusing to a beginner. Which deck to use? I use Aleister Crowley's Thoth deck, but I own an Aquarian Deck, a Sacred Rose Deck, and a Rider-Waite Deck. (I used to own more but I have this tendency to give them away to people who need a deck LOL). My daughter uses the Unicorn Tarot deck. So we are still at the question of which deck? The answer is any deck will work, but the one that you find visually and symbologically appealing to you will work better, so take some time and check out the pictures.

A standard tarot deck consists of 22 trump cards and 56 suit cards. The four suits are generally wands, cups, swords, and pentacles, but there are design variants like rods, staves, clubs, coins, disks, etc. There are now Dragon tarot, Fairy tarot, Womyn's tarot, Wolf tarot, Animal tarot, Witches tarot, Egyptian tarot, Celtic tarot, Magic the Gathering tarot, and many others too numerous to name. It is now possible to find a tarot deck that suits your taste and personality more exactly and this is a very good thing, as divination works best when the symbols are appealing. So the best tarot deck for you is the one that you like the pictures on best...it's that simple.

So now you have a deck, how to use it?
The first and most important step is to learn the meanings of the cards. All decks come with a little booklet that gives a brief description of the meanings of each card and this is perfectly good to get started on. You can purchase a book on tarot (my fav is the The Book of Thoth by Aleister Crowley, but this is specifically designed for the Thoth deck) to learn more complete meanings, but this is not necessary to start off with. Some good exercises to learn the meanings is to use the cards like flash cards, going through the deck and trying to name the meaning from memory. After some practice you should have at least the generic meanings down, the more specific and subtler meanings will come with practice, also the pictures themselves should give you mnemonic hints. Another way to fix the meanings in your head is to take each card and study it, then copy the meaning down by hand in your book of shadows. Whatever method you use, once you have become familiar with each cards meaning you are ready to begin using the cards for divination.

This is done by means of a "spread". Just as there are lots of tarot decks there are lots of spreads. One of the most common (and probably the one that is shown in your little booklet) is the Celtic Cross Spread. This is a 10 card spread laid out in the form of a cross. 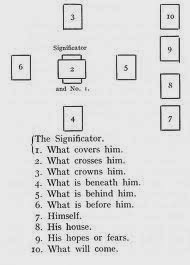 As you can see the Celtic Cross is designed to foretell the general future of a person and really doesn't lend itself well to more specific questions or questions about the properties of a magickal substance. It also only places one card for each area, thereby limiting the nuances that could be expressed.

Another spread which I find more specific and effective is the Pentagram spread. 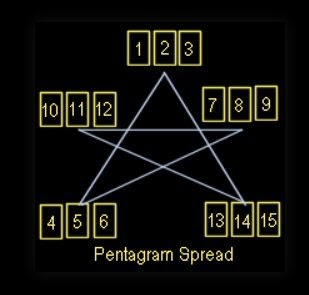 A third spread I call the Yes/No spread, is fairly simple. The question should be phrased as a yes/no question. You lay five cards in a row from left to right. Reversed cards mean no, forward cards mean yes. You count the yes's and no's to get the overall yes or no (majority wins). The cards then can be read as farthest left~past, left-immediate past, middle~present, right~imediate future, furthest right~future.

There are many more spreads and you should feel free to investigate others or make up your own. As long as you know what each place is supposed to mean the spread will "work".

Mechanics or the Care and Feeding of a tarot deck:)

Shuffling:
You can shuffle as little or as much as you like in any fashion you like, as long as you do it the same way every time. This allows your dream consciousness a chance to "stack" the deck.

Reading a spread:
Beyond the specific meanings of each card you should look for predominations. For example a spread that is mostly trumps indicates great powers at work, a spread that is mostly swords indicates intellectual matters, cups emotional, disks earthly or material matters, wands physical or life matters. Also look for oppositions like swords and disks or rods and cups..this may indicate conflict or opposing forces at work.

Storage:
You can keep your tarot deck in the box they came in, but I find it aesthetically pleasing and conducive to my belief in their power (which is what makes them work) to wrap them in a swatch of silk and put them in their own box (I have one in a stain glass box, one in a stone box carved with celtic knotwork, one in a wicker box and one in an orange silk pouch). I keep my favorite deck on my altar, but any place where they aren't going to be upset or casually man-handled is okay.

Handling:
I keep one set that I use on/for other people (the Aquarian deck) and I allow whoever I am reading for to touch this deck, but all others are off limits. I do this because I have found that keeping your decks attuned only to you makes them more effective. If someone touches your personal deck though, all is not lost. Simply put them back in order (0-21 trumps, 1-King suit cards) this "clears" the deck and you can reset it to your own personal attunement thereafter. (course I still get upset if someone touches my personal deck cause I have been tuning that baby for years LOL)

Mindset:
Most important when doing a reading is how and what you are thinking as you do the spread. Before beginning any tarot reading, I place the deck in my left hand and say a prayer to the Goddess, then I spend a few moments in meditation to bring myself to a light trance state. While I shuffle and lay out the spread (and still in a light trance) I keep the question as the only thought in my head (sometimes chanting the question out loud helps maintain the purity of the thought). If you do not do this your spread WILL reflect whatever happened to be floating around in your head...for example: you asked a question about the best time to do a spell, but your mind kept popping over to the car needing new tires. Chances are really good that the spread will be more about the new tires your car needs than about the spell timing, so it is very important to remain focused.

As with everything else, practice is absolutely necessary to getting "good" with tarot. The more familiar you are with your deck and the more readings you have done, the better your readings will get and the more accurate they will become. It is a good idea to keep notes on readings in your book of shadows, as I have found, sometimes readings I thought I had blown proved to be very accurate (scary accurate) when I reviewed them months or years later."